Lagada was a secret shelter for Ikarians during the days of piracy. It is one of the oldest villages of Ikaria, well hidden among the forested slopes of the Western part of the island. Langada existed from the beginning of the Byzantine era and flourished after the Franks had left. There are very old anti-pirate houses, the old church, the ancient jail, and the remnants of the government house of the Free State of Ikaria, which remind us the historical past of Langada.

Every year, on the 15th of August, there is a great traditional feast, a "panigiri", which lasts from morning until the morning of the next day. 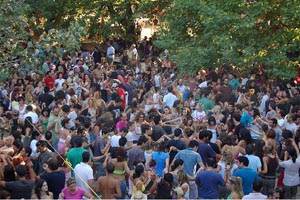